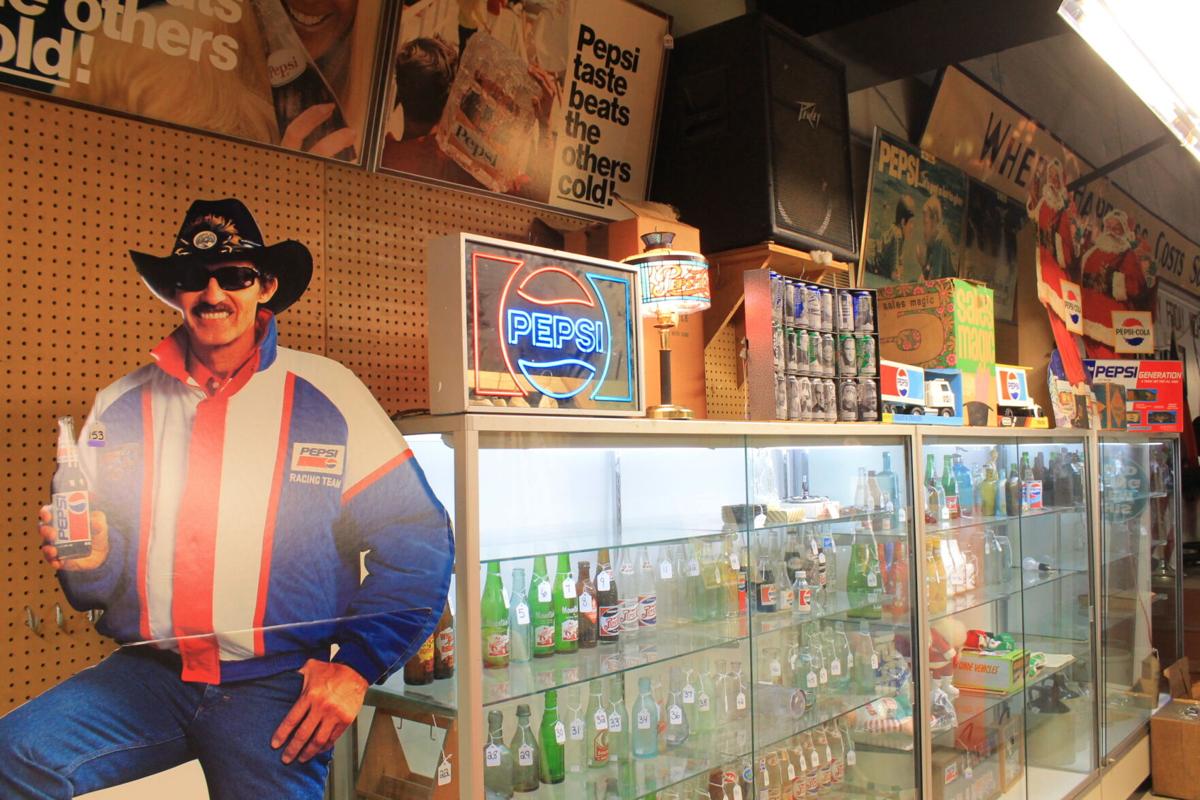 Just a small portion of the rare and large collection from Burnett Pepsi Cola Bottling Co., out of Roxboro, up for auction on Thursday, September 16 beginning at 10:00 a.m. 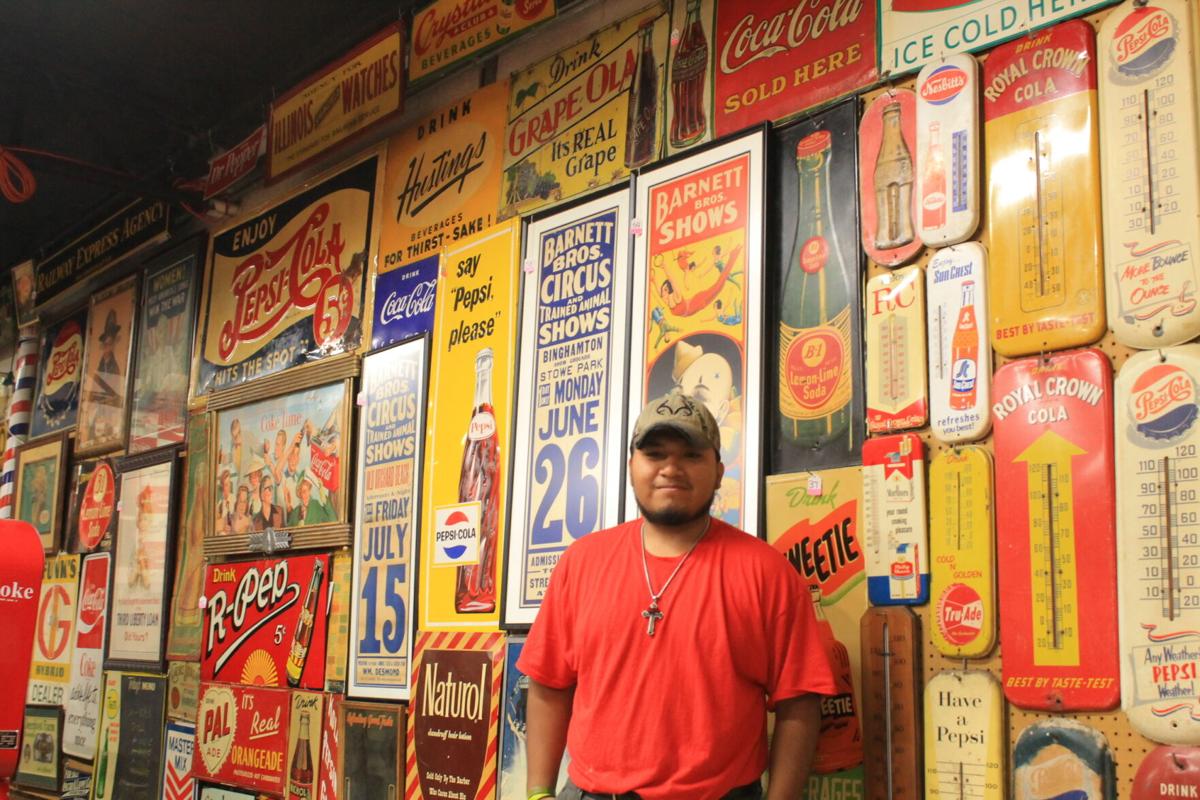 Jose Tonja, who works at the Mebane Antique Auction Gallery, stands in front of the mural of advertising signs and thermometers he created ahead of the auction. 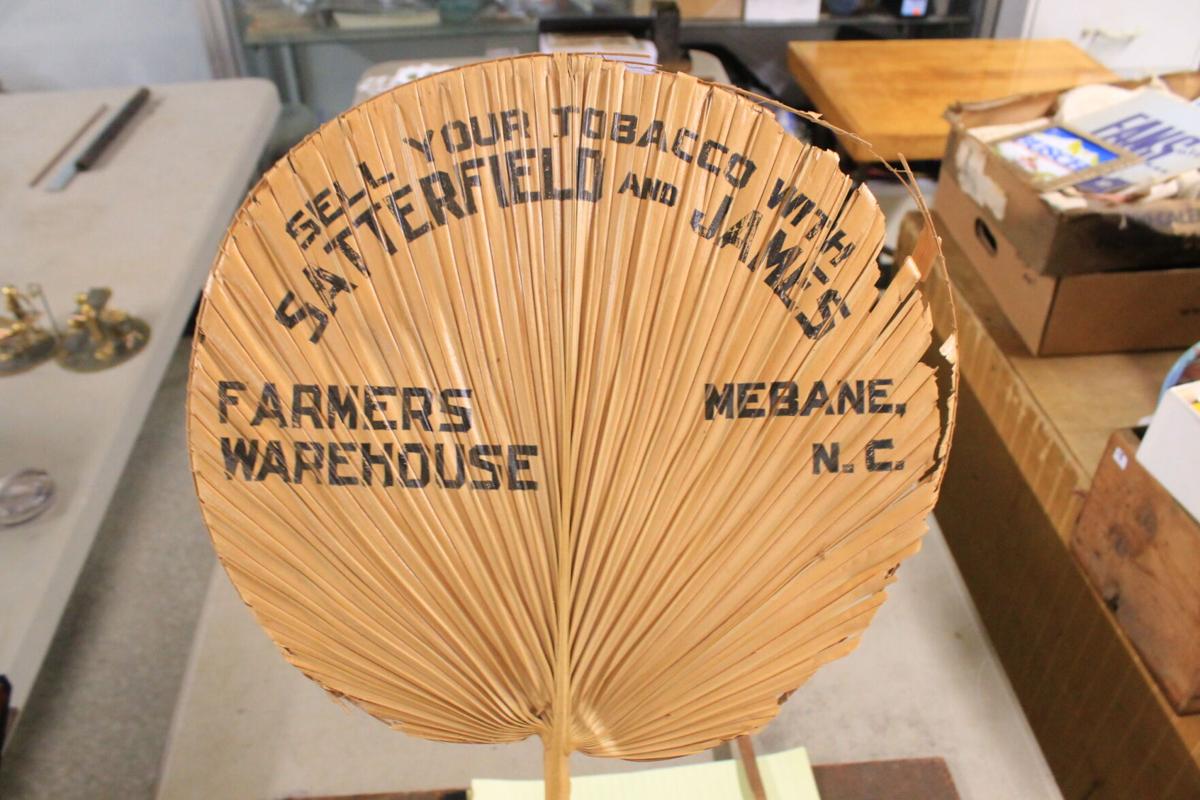 A hand fan from the Farmers Warehouse, once located in Mebane.

Just a small portion of the rare and large collection from Burnett Pepsi Cola Bottling Co., out of Roxboro, up for auction on Thursday, September 16 beginning at 10:00 a.m.

Jose Tonja, who works at the Mebane Antique Auction Gallery, stands in front of the mural of advertising signs and thermometers he created ahead of the auction.

A hand fan from the Farmers Warehouse, once located in Mebane.

The annual Carolina Country Store Auction at the Mebane Antique Auction Gallery will return for its 28th year next week after last year’s auction was skipped due to the pandemic. The auction will begin, in-person and online, at 10:00 a.m. on Thursday, September 16 and running all day each day through Saturday, September 18.

Auctioneer Jon Lambert – owner, founder, and operator of the Mebane Antique Auction Gallery – started this auction in 1993. Lambert said it has grown into one of the largest auctions in the country, attracting around 500 visitors each year. The auction is known nationally, and even attracts interest internationally.

“We’ve formed a family of repeat customers that go back 25 years who attend this every year,” Lambert said. “Normally, in the past, all the hotels going from Burlington and Durham were full and reserved for a year in advance of this event. A lot of the customers might come in from the west coast [or] from the east coast, and they meet here to exchange items – maybe, they’ve done private purchases throughout the year, and they said, ‘We’ll meet you at Mebane in August.’”

Normally, the auction would take place during the first weekend of August, but the decision to push it to September was made in July. Lambert said they are confident about holding the auction next week. He and his wonderful staff have been working tirelessly to get everything set up.

“We feel good about the vaccinations and encourage the face coverings while they’re here, but we feel comfortable,” Lambert said.

Items for sale at the Carolina Country Store Auction are from estates that the Mebane Antique Auction Gallery represents. And that’s another reason why the auction will be held this year. “We help families get closure, families inherited estates and these goods, they have no idea what to do with it,” Lambert said. “That’s where we come in. We’re there to help the families, we don’t try to buy anything from the family.  We represent the families to maximize every dollar we can for the family or the estate.”

This year, different estates’ items will be on sale on different days. The catalog sessions, in which folks can participate in person, online, over the phone and absentee, feature a wide variety of unique items. Those sessions are as follows.

On Thursday, September 16, from 1:00 p.m. to 5:00 p.m., the Bottle Session auction will take place. The items for sale during this session come from the Burnett family. According to the Roxboro Courier-Times, the Burnett family founded the original family-franchised bottling plant for Pepsi in 1905 in Roxboro. Now many of the family’s rare bottles and memorabilia are up for auction, like the ultra-rare Mountain Dew Party Jug with its original cap – the bottle could go for up to $10,000.

Next up on Thursday, from 4:00 to 5:00 p.m., is the Glass Jar Catalog Collection session. In this session, one of the featured items is an original Lance Crackers jar. Lambert said there are only about four of those in existence, and he estimates it’ll sell for between $2,000 and $4,000.

To cap off the evening on Thursday, the Featured Apothecary Medicine Bottles and the related items session begins at 5:00 p.m. Many of the items featured in this session are Mrs. Elsie Booker’s, who, in 1945, was the first woman to graduate from UNC-Chapel Hill’s School of Pharmacy. She obtained over 3,000 items which went to furnishing the pharmacy exhibit at the North Carolina Museum of History.

Friday, September 17, from 10:00 a.m. to 10:00 p.m. will be the Tobacciana Session, focusing on items related to the state’s cash crop. Some of the featured items in that session come from Tom Gray’s N.C. Tobacco Collection. Gray is the great-grandson of R.J. Reynolds, founder of R.J. Reynolds Tobacco Company. Some other featured items come from the Emory Discovery Collection.

The auction’s final day, Saturday, will center around the Best of the Best across all categories, and will begin at 10:00 a.m. and end at 10:00 p.m.

There are also going to be some items of local significance for sale, such as century-old hand fans from the Farmer’s Warehouse and Fitch-Riggs Lumber Company, both once in Mebane. There’s also a 1960-1961 Hillsboro High School (now Orange High School) basketball schedule poster up for grabs.

“What this sale does, it brings back memories to all the people that come here – it’s nostalgia,” Lambert said.

People will go to the auction and see something that takes them back to a different time immediately. Lambert said, you never know what will evoke nostalgia for someone, and that’s why they accept any items related to a country store.

“We want everything that was related to a country store, even if it’s not valuable,” he said. “We like bottle openers, counters, showcases, advertising clocks, thermometers, store doors, everything you can imagine. So, if you want to restore a country store, you can come here and pick up the objects, and it brings back memories.”

Jon Lambert began pickin’ when he was a boy and opened the Mebane Antique Auction Gallery in 1991. In the early 2000s, around the time of the internet explosion, he moved away from pickin’ and reselling and into handling the sale of families’ estates for a commission.

In the early 2000s, antiques and vintage items became in vogue; the value of antiques of all sorts skyrocketed. Lambert said his conscience prompted this shift.

“I truly could not buy something from a family, they would come to me and say, ‘Just give me whatever you want,’ I couldn’t do it,” he said. “I could tell so many stories, they brought me something and I knew what the value was and I would say, ‘I’m not buying that, I want to represent you and sell on commission.’”

The secret to his success all these years, he believes, hinges on three things: correct product knowledge, ethics and trust. He understands that the people he is representing are trusting him with their inheritance and, as he put it, “Why would I want to steal from their inheritance?”

Lambert told the story of a family who needed money for the son to go to college. They came across a piece of pottery they wanted Lambert to sell, expecting to get enough to send him to school for a semester. The piece sold for $28,000.

And that’s why he keeps on going. “I get a more personal satisfaction out of seeing a family smile after they received their goods.”

Check out the Mebane Antique Auction Gallery website for a full list of the items up for sale.

Sorry, there are no recent results for popular images.