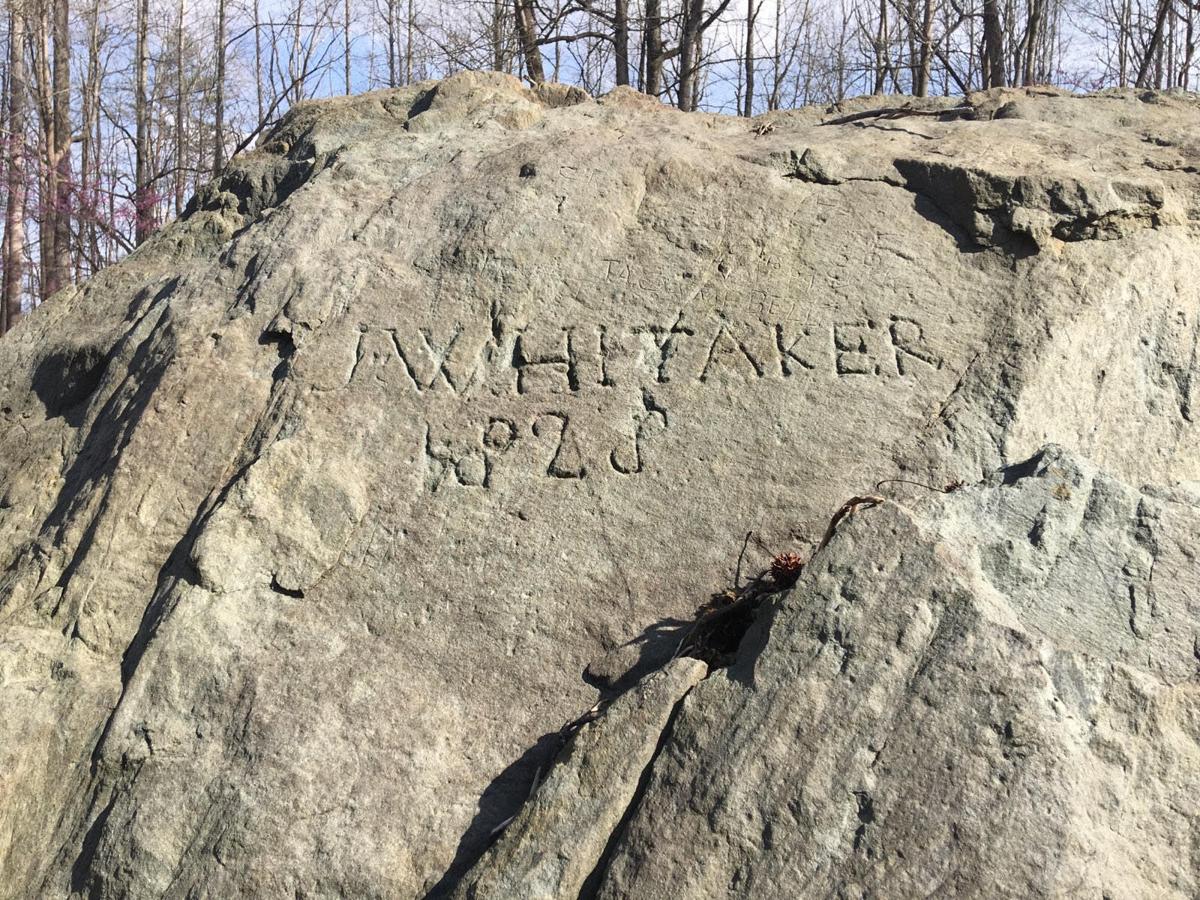 The photo above shows J. Whitaker's name, along with a date of 1828, carved into the historic rock. Legend has it Whitaker is buried at the foot of the rock. 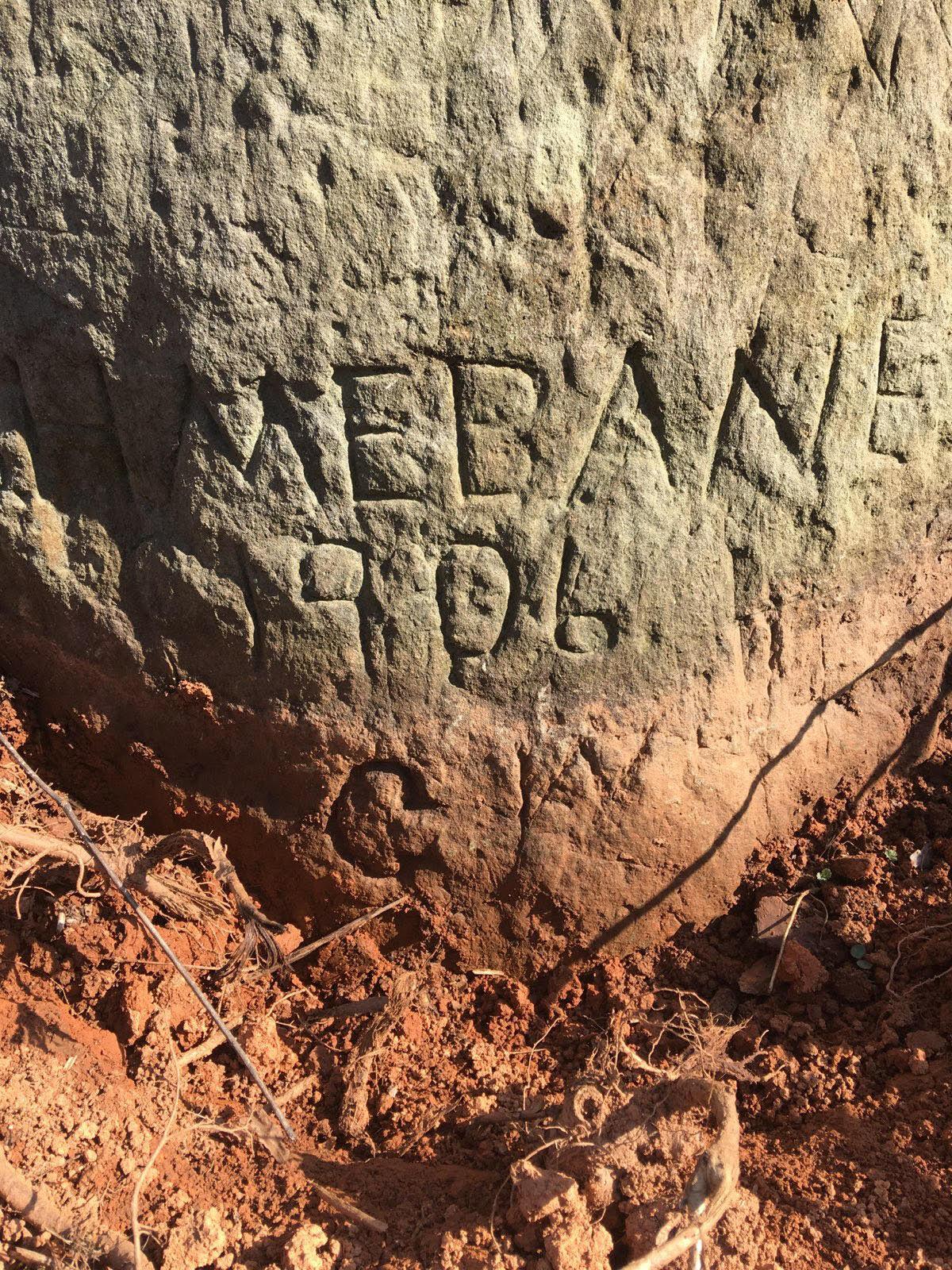 The photo above shows the name B. H. Mebane carved into the rock, with a date of 1906. Gary Clark, who has done extensive research on the rock and the names carved into it, said that B.H. Mebane is related to Alexander Mebane. That connection cannot be confirmed, however.

The photo above shows J. Whitaker's name, along with a date of 1828, carved into the historic rock. Legend has it Whitaker is buried at the foot of the rock.

The photo above shows the name B. H. Mebane carved into the rock, with a date of 1906. Gary Clark, who has done extensive research on the rock and the names carved into it, said that B.H. Mebane is related to Alexander Mebane. That connection cannot be confirmed, however.

If you’ve heard stories about the historic rock near Stagecoach Road and want to see it but never have, here’s your sign to do so, as it will soon end up being buried or destroyed as development moves in nearby.

The large, partially buried rock located off Stagecoach Road has been there since an actual stagecoach used the road, and who knows how long before that. Over the years, many people, some of local significance, have etched their names in the stone.

The now-underway construction of Tupelo Junction, a new housing development featuring 181 single-family homes on the corner of Saddle Club and Lebanon Roads, will result in destruction of the rock, City Manager Chris Rollins told the Mebane Enterprise on Thursday.

The rock is located very close to one of Tupelo Junction’s future entrances, and it remaining there could create issues and dangers for drivers.

Rollins said that when the development was first proposed, extensive research was done to see if the rock could be moved or protected, and whether it was worth protecting and moving. The city tried to move the rock, but found it was immoveable.

A guard rail could be built around the rock, Rollins added, but the development calls for widened roads.

For a very long time, the rock has been at the center of various legends about the long-ago Mebane, then known as Mebanesville.

Local historian Phil Mace said the rock is located near what was once a stop on the stagecoach road.

“I can imagine people waiting on the stage, going down and putting their name on the rock along with everybody else's,” Mace said.

There’s also the legend of J. Whitaker, who was said to be a stagecoach driver in the early 19th century who was killed while driving and buried under the rock. However, Mace hasn’t ever been able to confirm that.

“I haven't been able to confirm that he was killed there or that ever happened, as far as newspaper stories or other documents from the past, so there's nothing to confirm it,” he said. “Of course, there's nothing confirmed that it didn't happen either. You can’t prove either way or the other, I just can't find any record.”

In November 1975, then Mebane Enterprise staff writer Sondra J. Harris wrote a story about the rock and the legend surrounding it. In the story, Harris interviewed C.E. Patterson.

According to the story, Patterson rode into Mebane on muleback in 1894, and had the story of the old rock passed down to him.

Patterson said Whitaker was driving the stagecoach – which ran between Greensboro and Raleigh – and came down a nearby hill too fast and “the horses kind of got away with the man,” throwing the driver against the rock and killing him. That’s why his name and the year are carved in the rock, at least that’s what legend, and Mr. Patterson, say.

In the story, Patterson went on to say that one can see a “headless horseman” near the rock on stormy nights.

In October 1975, Patterson, his cousin W.T. Patterson and his nephew Joe A. Rice cleared the vines and shrubs off the rock. That’s when they first saw the writing on the rock that they’d heard about all their lives.

Patterson and Rice added “they would like to see the rock protected…so that visitors and Mebane’s own citizens could view the rock and be more aware of the long history of the town.”

Jump back to 2021, and two Mebane residents have the same idea that Patterson and Rice had 46 years ago. Except now they’re running out of time.

Avis Rice, husband of the late Joe A. Rice, and Gary Clark have been trying to bring awareness of the rock’s significance and importance to citizens and city officials, alike.

Ultimately, Clark wants the rock to be moved and preserved. But, if this can’t happen, he hopes the City of Mebane will at the very least document the names on the rock and take photos of it.

“I wish they would at least take the time to do research and catalogue it, keeping it in history with pictures or something of that nature,” Clark said.

He’s been in contact with city officials, such as Mayor Ed Hooks and Assistant City Manager Preston Mitchell, but said he didn't get any definitive information on the fate of the rock from them or anyone else.

“Nobody can tell me what's going to be done and they're out there bulldozing,” Clark said. “They've already hit the rock and done some damage to it.”

Avis Rice could not be reached by the Mebane Enterprise for comment on the situation.

A letter from the North Carolina Department of Natural and Cultural Resources, dated December 2019, concerning whether the rock should prevent construction of Stagecoach Corner said the department “conducted a review of the project and are aware of no historic resources which would be affected by the project.”

But Mace believes, regardless of if any of the stories surrounding the rock are true or not, it’s worth, in some way, preserving as it has historic and cultural value because so many people, over so many years, have signed their name on it.

“People have been signing that rock for years; to me, that makes it historical,” Mace said. “You could consider it graffiti [but] there’s a little bit of history there.”

However, right now it looks like the rock won’t be around much longer. The Mebane Enterprise will update this story as new information comes out.