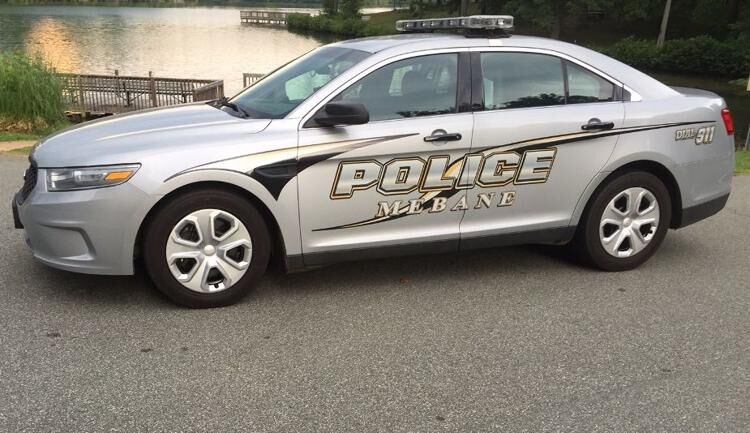 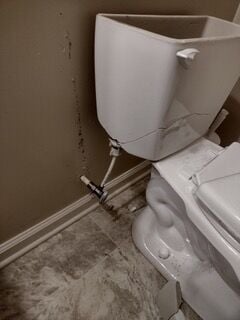 The bullet that entered the family's home ended up cracking their toilet. 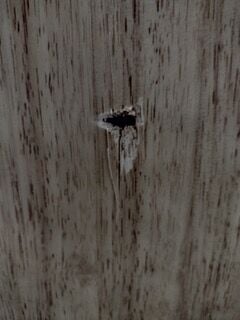 Where the bullet entered the family's apartment: through their bedroom wall.

The bullet that entered the family's home ended up cracking their toilet.

Where the bullet entered the family's apartment: through their bedroom wall.

Early Tuesday morning, December 28, the Mebane Police Department received reports of shots fired at Carden Place Apartment Homes at 105 Carden Place. Upon arrival, police found that a shot had been discharged into a dwelling occupied by a family.

Mebane PD said upon their arrival they found evidence in the parking lot that multiple shots had been fired, in addition to discovering a shot had been fired into an occupied dwelling.

A silver-colored vehicle was seen leaving the scene at a high speed shortly after the shots were fired, but authorities currently have identified no suspect(s) and the cause of the incident is unknown at this time.

Amanda Harless and Darrin Davis, and their six-month-old daughter, live in the apartment the bullet entered, and consider themselves extremely lucky to have been unharmed as they usually would’ve been in the room the bullet entered around the time it did.

The round entered their apartment through their bedroom wall, ripping directly over their bed and into their bathroom where it cut through the cabinets and shattered the toilet, Davis said.

“We just decided to lay on the couch that night and watch TV instead of in the bed and Olivia [the couple’s daughter] was in her crib. We heard of a real loud boom, you know, we figured it was a gunshot – it was really loud, just one singular shot,” Darrin Davis said. “Then, immediately after that, we heard about four or five rounds go off and that was not the same sound as the first boom.”

Davis said the Mebane PD told him they didn’t think the shots were targeted at the family’s apartment, but they weren’t sure.

Currently, the family is without a place to live, as they moved out soon after the incident out of fear for their safety (Harless is also pregnant with twins), and due to the trauma now associated with that apartment. The family is now looking for a new place to live.

Davis said it is going to cost them “a lot of money” to get out of their lease and, upon returning to the apartment last Thursday afternoon to pick up mail, they found the damages had yet to be repaired.

“Thankfully we're all OK other than mental and emotional trauma coupled with nowhere to stay,” Davis said.

This is an ongoing investigation. Anyone with information pertaining to this incident is asked to contact the Mebane Police Department at (919) 563-9031 or email the information to info@mebanepd.com.